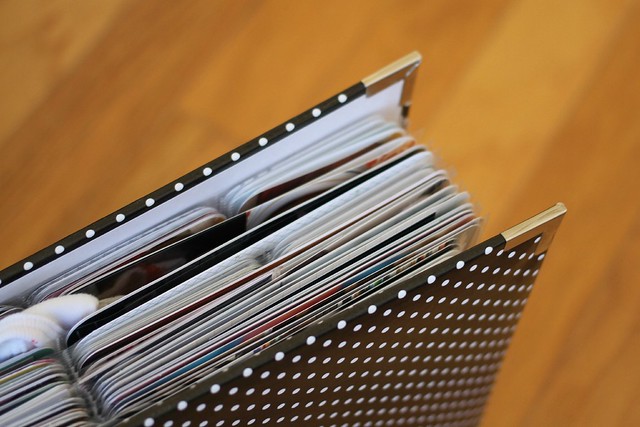 When I came back here a few weeks ago to see how far I got when it came to posting my Project Life 2014 pages, I was really surprised to realize that I only ever posted my January pages. And then I remembered that while I stayed current until the beginning of February, I didn’t make a single page from early February until I began my maternity leave in May. I got myself all caught up, and then didn’t touch it again until Ben was two months old… and that pattern continued until December. December was amazing, because the instant photos meant I could stay caught up, which felt SO GOOD after being epicly behind all year long. I’m determined to keep this momentum with 2015, but we’ll see how that goes. I’m switching to 9×12 albums, but they aren’t available yet. Ah well. Anyway! Here are some of my favorite pages from 2014! 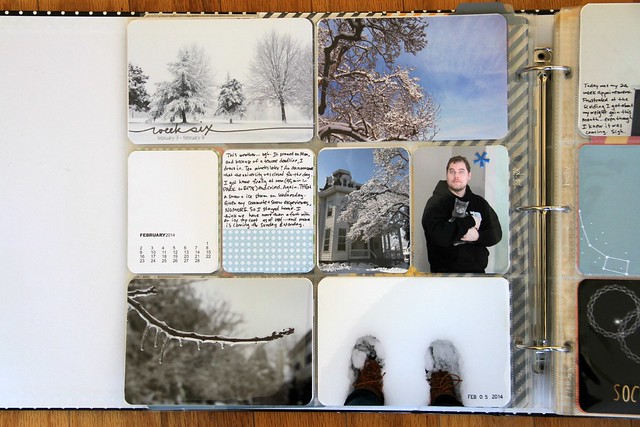 Many of my winter pages look like this, all snow and ice and blue. 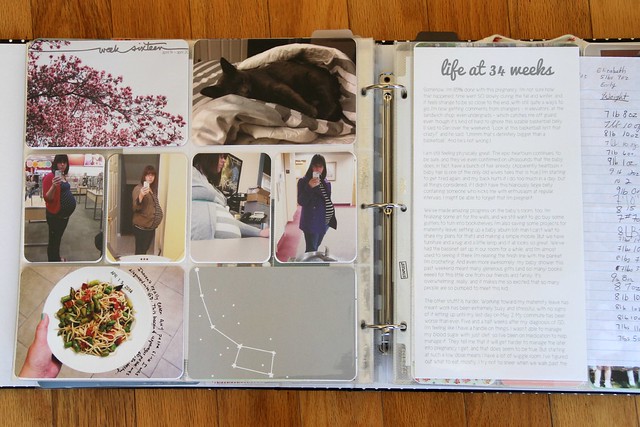 Here, I was documenting my maternity outfits each day, figuring I’d want to remember that some day. I also included this blog post, and the paper with my extended family’s guesses for Ben’s arrival and size. 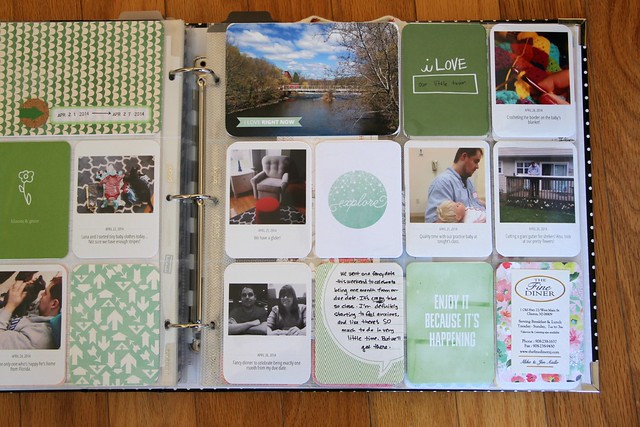 I don’t use a lot of green, but in 2015 in general, I was really trying to stick to color schemes with each spread. This is also a good example of the method that made it so possible to catch up – I made these 3×4 cards with the Collect app on my phone, and then uploaded them directly to Persnickety Prints. In 2014, I finally started ordering 3×4 prints, rather than printing two on 4×6 paper; not having to trim them really saves so much time. 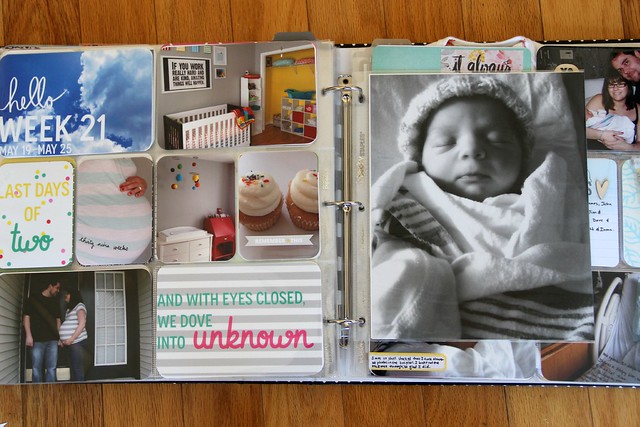 I had to share this page, because I stared at that left side for months; I made that page just before Ben was born, and then my album was open to that page until I caught up again. I included some 8×10 inserts, with one of our first photos of Ben, which is one of my absolute favorites still. 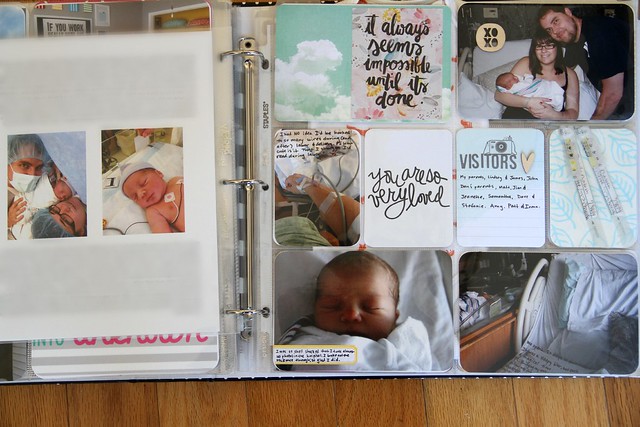 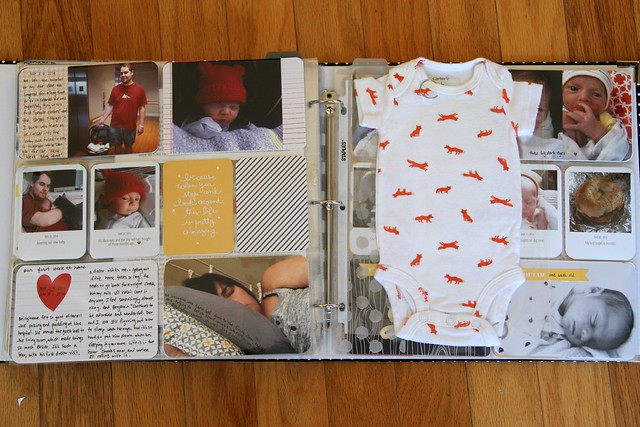 This spread also includes some cards from the Collect app, plus one of Benjamin’s teeny tiny newborn-sized onesies (this one was my absolute favorite, so it’s fitting that it has a place of honor here). I’m fairly sure I saw this in Elise‘s Project Life album when her daughter was born, and it stuck in my head because it really reminds me just how tiny he was. 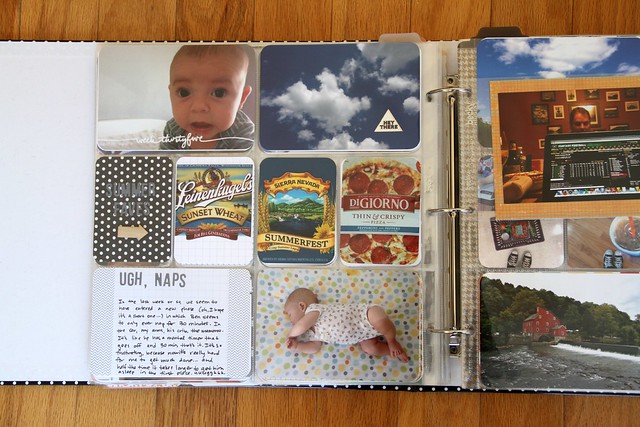 Here’s a page from the end of the summer. I like it because I printed images of some of our summer favorites (the beer we couldn’t stop buying, and those frozen pizzas that I’m still addicted to.) 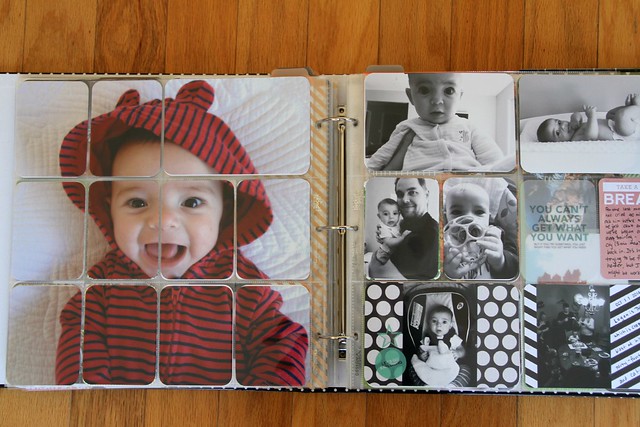 On the left here is one of my VERY favorite photos of Ben; it was just begging to be printed full size. (And printing full page photos is absolutely a secret trick to catching up when you’re super behind.) On the right are a bunch of photos from one day with Ben; I had been planning to do a day in the life but I never got around to writing out what we did. 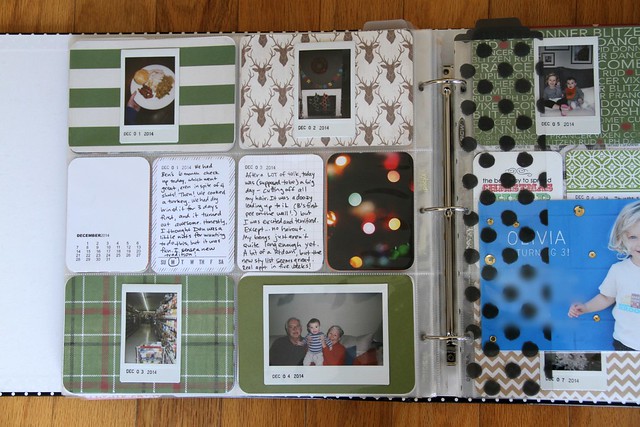 This is my first page from December; you can see how I incorporated the daily instant photos, plus some cards writing out what we did each day. 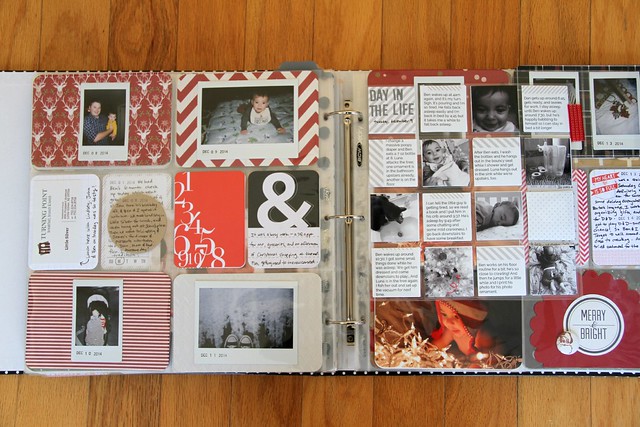 I love the color scheme here; I had a 6×6 paper pad with holiday paper, and it made it really easy to make things look cohesive. On the right, I used a 2×2 coin protector page to include a Day in the Life. Dan and I both did Day in the Life in March, and I’ve been wanting to do another now that Ben is here and we’re in the thick of it. It was a regular day at home together, and I took photos and wrote the journaling as the day went on, which was really fun. 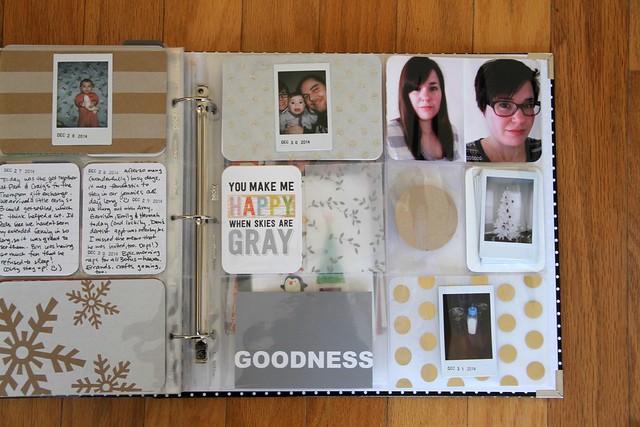 And here’s the last page of the year, with our last few instant photos, and the before and after of my epic haircut (and yes, I did totally cut all my hair off on New Year’s Eve. What better way to start the new year totally fresh?)

So that’s it! I’m really glad I started Project Life a few years ago; it’s such a wonderful creative outlet, and knowing my photos have a home and aren’t just lingering on a hard drive somewhere is SO gratifying. I’m so excited to keep going with this project in 2015!