Dan and I have lived exactly 175 steps (I counted, obviously) from a homemade ice cream shop for over a year now… and we’ve only been there once. We may be the only people on earth who could resist ice cream for that long. The lactose intolerance on my part helps, but I don’t know what Dan’s secret is. Either way, we realized last week that we haven’t had ice cream all summer (!) so it was high time to fix that. So one night after he got home from softball, we took a walk.

We walked past the tow truck place, the auto glass place, and the strange lot with lots of trucks. Barbed wire and a cell tower sure make a pretty sunset even prettier, don’t they? 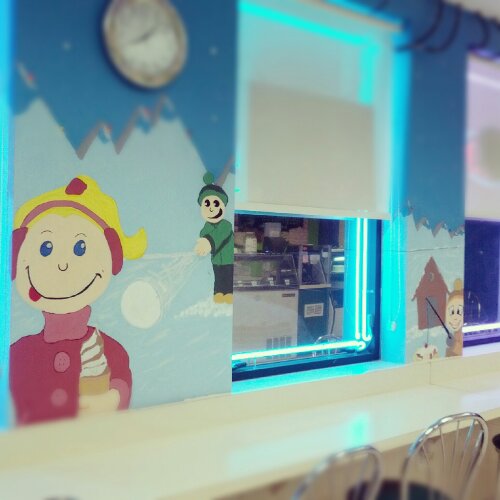 We were greeted by creepy paintings, neon window coverings, and the 50s satellite radio station.

There was also a walrus.

Dan got his very favorite: cherry vanilla. (How did I not know that was his favorite? These are things you should know about the person you’re marrying, aren’t they?)

And I get my favorite, which is soft vanilla in a waffle cone with rainbow sprinkles: the ice cream I hardly EVER get because when you’re driving to and from the ice cream store, you don’t get a cone. But when you’re walking, no problem!

We watched the sunset get prettier and prettier as we ate our ice cream, and it was such a classic summer evening thing to do. We probably should do this more often.