Project Life continues to be one of my favorite things ever, and since 2015 began, I have been trying to keep up the momentum I had in finishing my 2014 album. I feel like I spend a lot more time looking at blog posts and instagram photos of other people’s spreads, and it makes me want to get my hands on paper and printed photos of my own really badly. So far this year, I have been ordering prints of my photos once a month, and then making the pages once the photos arrive on my doorstep. This is partly because more often than not, when it’s time for my free time during one of Ben’s nap, I have to do basic human things like shower and eat. (The logic there being that it’s easier to edit and order photos in one chunk on a weekend, rather than in ten minute increments each week. I’m not sure if this process will continue to work, but I’m going with it for now. Even if it bums me out to have to wait so seemingly long to actually make pages.)

I have decided to use a 9×12 album this year, after two and a half years of working with the 12×12 size. I wanted to change things up, and I was also thinking that the slightly smaller page size might be easier to keep up with. I also theorized that I’d use a more “interesting event/noteworthy day” set up, as opposed to the more strict two pages per week method I’ve used up until this point. I’m not sure if it’s my rather… orderly… personality, but so far? It’s mostly working out to be two pages per week. I am giving myself a little more leeway when it comes to leaving out photos or days that don’t seem all that interesting, though. So maybe it’s working? Or maybe I just like the freedom of not feeling like I have to put a card with the week number in there each week? Either way, I’m enjoying the creative jolt that the different size has given me so far. Oh, and I don’t actually have an album yet, because I wasn’t totally jazzed about the initial release of 9×12 albums. But there are different designs/colors supposedly coming soon, from two sites, so I’m hoping I can get one soon. (Having my pages loose is making me nuts.)

So here are my January pages! 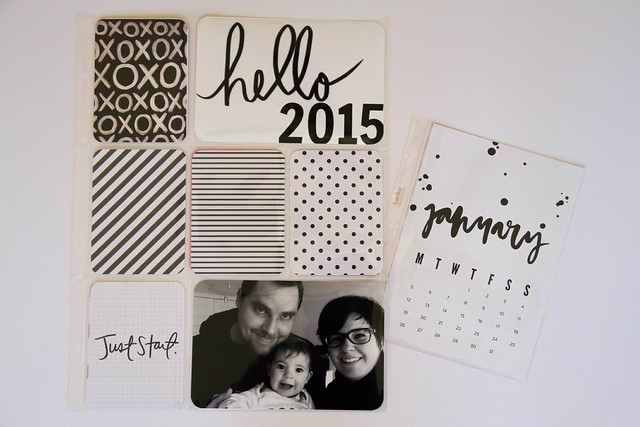 I’ve been really drawn to black and white lately, and I always like to keep my title pages relatively simple (and full of stripes, of course). I am using a printable calendar from Harley Quinn & Co for monthly calendar title pages, printed 5×7. 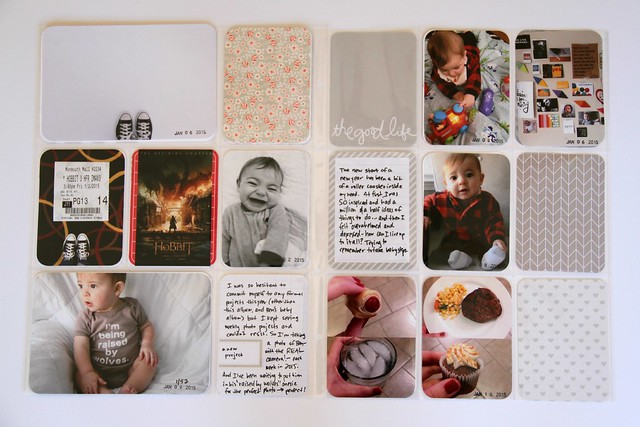 I’m also including my weekly photos of Ben in my spreads, and it’s really nice to know I have a really good, non-iPhone photo of him to include each week. 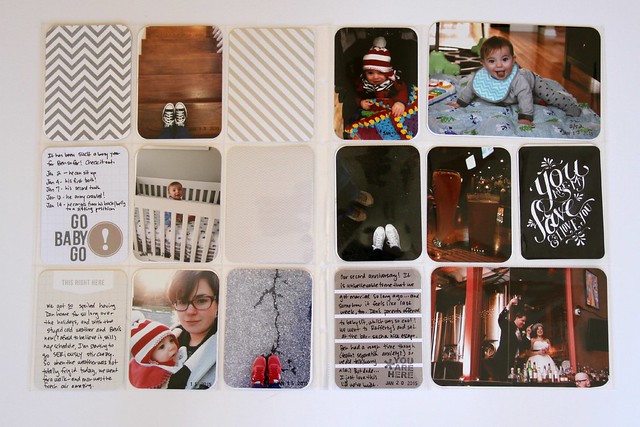 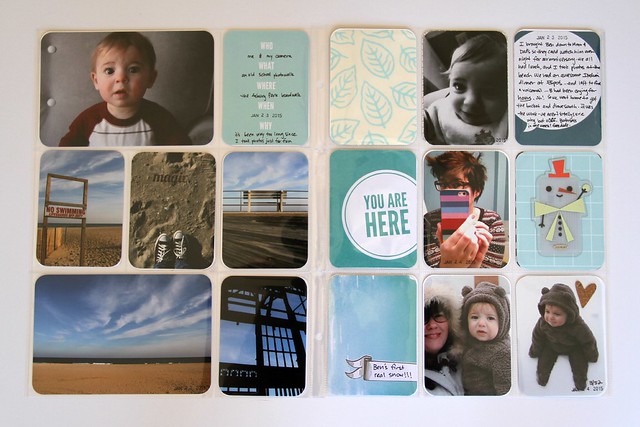 I keep finding myself drawn to gray and black and white when it comes to journal cards and filler cards this year, so this was my attempt to make a concerted effort to include color. I sorted all of my cards by color right after the new year, thinking it would make it easier to find cards that coordinate with the photos on my pages, but I keep reaching for black and white cards. I’m wondering if it’s a winter thing, or if it’s more of a style evolution. This week was also a great example of just using the best photos – last year I would have used an insert for those beach photos, or just included one, and it was so fun (and liberating!) to be able to include all of them. 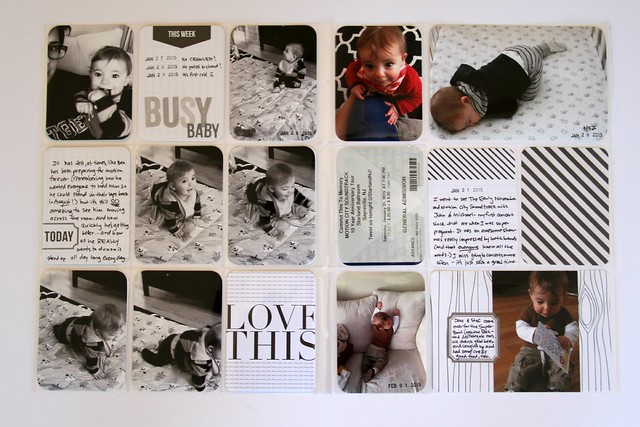 And this turned out to be one of my favorite spreads of the month. All of the photos of Ben on the left side are from one afternoon the day after he learned to crawl, and most are screenshots of a video I took. (And therefore all blurry and grainy, so black and white was absolutely the way to go!) He has been SO busy and all of my photos of him are blurry these days, and I like that these photos reflect that.

So that’s it! I’m hoping to be able to get my February photos ordered today, because I can’t wait to keep working on this.